pop is experienced not as something which could have impacts upon public space, but as a retreat into private OedIpod consumer bliss, a walling up against the social.

I used to hold the stick with my bare hands
I used to feel its softness
I used to let her woo me.
I used to speak to it, to make her believe
time was our thing,
that I would wait to eat her up.

In the middle of the parking lot, shaky-electric
open-mouthed, OedIpod
hold the thing tight in his fist—
copper and grease.

The day we rode
the neutrino wind shaked your hair
and we were for an instant the golden perfection that blazes between my legs
when the switch goes up and down.

It wasn’t easy
talking to you, I-OedIpod
without words, in plain daylight
as we said things like “I’ll be back in 5 minutes”
or I won’t
‘cause this was everything we had,
this little stand of stamps,
of signatures in the air, filling white boxes with silhouettes and shadows,
of pages spited afar— listen, I-OedIpod,
how tenderly they fall, honey over the desk afar, in the Printing Room,
made of labels and pulsations,
of twinkling lights
at the verge of the perverse bed, the cube of power that turns you on
grasping the curl of a cord that makes a sound and stops
only steady over the instant
between the second when the voice comes
and the second when the voice goes away and sends its order:

stand up
cross the hung men’s gate
hear the narcotic voice
and give me one of those which are to be splitted in half with the nail
those that go under my tongue,
my mother tongue.

Because in iteration, you know, dwells the shadow of a kiss, OedIpod,
with bitten fingers,
long nights of reflections, the work/not-work stimulus that we call time,
that dough pierced
by vociferous mouths, dogs sat in a row,
men folded like chairs over the sand
seeing what leaves us
and what comes instead.

Either you don’t expect it
or you do and know and want him
to come and fill you of it as I do,
this anxiety, this craving to see see
to be subjected by something similar to this intensity, something
that palpitates like this thing
that feels the way reality does.

God was the thing of silence.
A voice without movement
that opened the night each dreadful night
burning like a metal until 3 a.m.

It was that thing of darkness we acknowledged ours,
we clutched shaked by mercy.

When it rang it was the timid light
that start all fires.
When we opened our mouths
it was the dose of incense that burned the edge of our Oes.
When we wanted it
it was the tiredness,
the book waiting for us at home.

God was the waiting, the boredom
and the money charged into our accounts we can’t see
for it’s only twinkling numbers
on a blue screen.
It was the letters that are starting to say,
the heinous whirlpool of leaves when it mutters, sparkles.
It was the look on the thing
and the way the thing assembles itself.

It was the house
the window
the cupboard with the nice glasses
the drawer
the sheets on the line
the toothbrush
the coffee table
the comb
the leg of the bed
all lost socks and papers
the steam of the kettle
the heat, by the morning.

We knew how to pronounce the name because we had heard it many times.
We were afraid, though,
of saying all the vowels backwards,
that one day he would show himself as a whole
and turn out to be only a part.

There was an old house:
big gardens and garage,
white agapanthus in the entrance. A summer house
on the street of the haberdashery;
Vanitas Vanitatum was its name,
and had long curtains.
It was that age when the toad grows bigger on our throats
and we can finally say our last names out loud. It was over the siesta:
the bicycles came down the hill and mudd was everywhere—it had rained that night
and the afternoons skid.
The house opened wetnesses to play with our hands
as we hid in the crumbling bathroom to look at it:
it was that age when things start to grow harder.

There  was an old house
but that night everything was lit up.

After the comeback from the fields,
this discrete and dreamy music sounded
mouth-opened,
muttering a prayer before the wind or
the afternoon rain, white with ashes,
shut her up.

I’m my pain, the crump on my arm, migraine
I’m my hand’s splendour when it roams your back,
the secret corruption of the bug.
I’m the flame that ignites itself,
the sizzling over the confessional, the patience of what’s left,
the remembrance (some instant of a remote day,
eager feet, the soft folding on a page).
I’m the virus and the vaccine.
I’m he who looks and sees everything
over the blurred window,
who shucks the steps over his infinite self-indulgence.

The design goes this way: recognizing patterns,
it is full with this experience, with raw memory
he set on a road of dots, doodles or straight lines,
as if it were stones over the head, fumes or water,
and it shoots:

He is standing, looking over, as in the dreams night awaits the day to come, your shame’s symptom. Someone ate and left the guilt in his hands to worship. Someone told him that this whitish thing was liquid silver. Someone told him that he could have things after inserting the stuff in the hole. That he could smell those papers and feel something close to the soulful nausea of praying. That if he gave those papers he would be offered with a slice of something. An old perfection made out of faces and names.

He lets the screen talk,
he listens to it: it is Mother
and she is saying important things, about old dead soldiers, cities in flames, lakes of blood.
The eye that made itself
among crystals
is now diluted
in a manless-time that will stretch itself
until it replaces my name
and spreads the word:

No one can see him, lump of woman or plant or the very slash that divides the cases, that polishes the details, that trawls the archives. Nobody told him which was the name of his thing and he grew up pointing it, abstracting the rest, following the cursor on his search of the image behind Father’s desk, behind that window that turned out to be a mirror. That the sound they make when they fall was only a bip, that they look just as numbers hitting the cold floor. It was the day when everything is in quarantine and shows itself exactly the way it is; a tangled wire.

But that kid could as well be god or animal
because he had his hair tied
to the elusive paw of the beast that Can do anything, because it Infects everything.

It’s still possible to see its virginal burning
in the discrete room of The unspeakable:
tongues of plastic fire
that move the primitive wheel that does not stop.

This poems were published, in Spanish, under the titles “Epístola a EdIpod” y “Tres poemas liminares“. The translations are mine.
The image is a detail of a photograph of an old sports hall in Russia took by Rebecca Bathory.

pop is experienced not as something which could have impacts upon public space, but as a retreat into private Oedlpod consumer bliss, a walling up against the social. 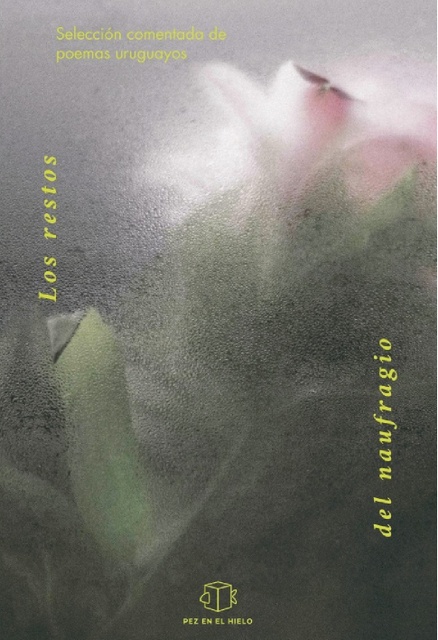